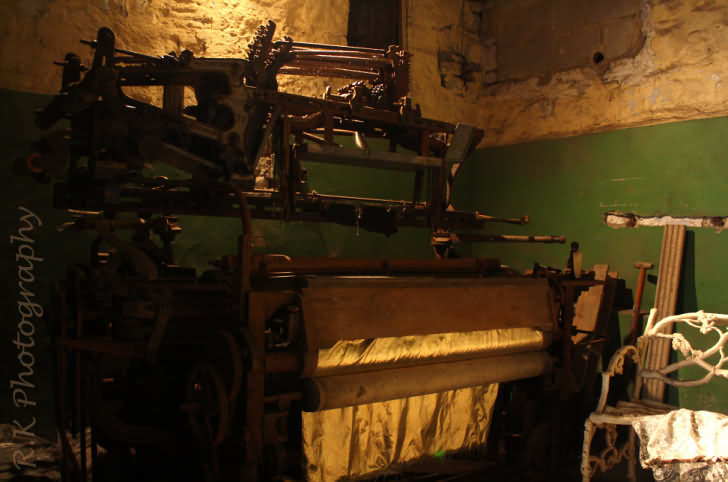 History of Lothersdale Mill on the Pennine Way in Yorkshire

The march of the Industrial Revolution was dependent on how successful men were in wresting power from nature. Man's first escape from the tyranny of dependence on human or animal muscle power was the use of falling water to turn machinery.

Use of Water Power in Lothersdale dates back to Sixteenth Century

This technology was used by the Romans in Britain but in common with most sites in the North of England, the use of water power in Lothersdale can be traced back with certainty only as far at the late sixteenth century.

In 1603 George Tillotson was paying George, Earl of Cumberland, one noble (33p) a year for the use of a corn mill at Lothersdale.

This mill was a far smaller structure than the present building and ground locally produced corn for the inhabitants of the surrounding hills.

By the end of the eighteenth century corn grinding was becoming uneconomical at Lothersdale Mill. The invention of the water frame and associated textile machinery by Richard Arkwright gave a new use for the power from the old mill.

In 1792 Thomas Parker, an eighteen year-old youth from Appletreewick, realised the potential. In company with three partners he converted the mill from corn-grinding to textile manufacturing.

In 1792 Lothersdale Mill was built on the site of a corn mill in 1792 by Chippendale Parker and Co. Partners were Thomas Chippendale of Skipton, Dr Wigglesworth of Cononley. Edmund Spencer of Cononley. Richard Croasdill of Marton Scar.

The partnership dissolved in 1798. Thomas Parker bought some of the partners shares and married Dr Wigglesworth's niece Ann Balme.

John Wilson went over the hill to Kelbrook and persuaded John Riddihough, a warp dresser at Smallpages to come to Lothersdale.

1842 was a bad drought year and the mill was stopped for many days while water built up in the dams. This decided them to install an engine by Roberts of Nelson with an underground flue up the hillside and a detached chimney 15ft high.

Lotherdsale Mill was extended in 1850s

In the early 1850s the mill was extended, a larger waterwheel was built by Ellison of Eastburn foundry and a larger engine installed made by J Dixon of Keighley and a 90ft chimney built to serve a new boiler and economiser.

The venture prospered and Lothersdale Mill expanded until by 1850, even the improved wheel then in use proved inadequate to power the enlarged mill.

James Ellison of Eastburn was consulted and the outcome was the improvement of the water courses of the mill. This increased the fall of water and power available to power the textile machinery at Lothersdale Mill.

In order to obtain the maximum benefit from the new water-courses James Ellison designed and built the magnificent forty-five foot diameter suspension wheel in Lothersdale Mill which occupies the wheel chamber to this day.

Lothersdale Wheel is reputed to be the largest indoor water-wheel in the world. The wheel at Dale End Mill in Lothersdale represents the acme of the millwrights craft.

In 1861, the returns for the Factory Inspector reveal:

The Franco-Prussian War created a boom in the textile trade in 1870-1, but the inevitable slump which followed hit Wilson, Hall & Co. most severely.

Without the guiding hand of the "old man", the three younger men quarrelled and dissolved the partnership in 1873.

John Hall struggled on but Fred Wilson took over in 1879 when John ran out of money.

The principal foremen at Dale End mill at Lothersdale were the Riddioughs, the Hills, and James Hartley Procter.

I don't know the later history but in 1983 June Barrow owned the mill which was non-textile. I believe the waterwheel is the largest indoor waterwheel in the world. In 2003 it is still intact.

Together with a small steam engine by Dixons of Keighley Lothersdale Waterwheel provided the power for 190 looms and 1700 spindles until it was taken out of use in 1932.

Some valuable information was received recently from Bill Orr the great-grandson of William Parker whose grandfather was the Thomas Parker who converted Lothersdale Mill from corn production to textiles in the eighteenth century.

William Parker was born June 15, 1857 in Lothersdale, West Riding of Yorkshire, England. He received a thorough education in cotton spinning in the mills of his older brother in England. He then moved to United States, where he became a pioneer in cotton manufacturing in the South.

He engaged in cotton manufacturing in Columbus, Macon and New Orleans, and in 1895 came to Cedartown, Georgia and helped to organize Mill No. 1 of the Cedartown Cotton Company.

He afterwards, in company with Messrs. A.W. Birkbeck and M.O. Berry, built the Paragon Mill, which was bought in 1900 by the Cedartown Cotton & Export Co., and became Mill No. 2 of that company.

Messrs. Parker, Birkbeck and Berry then organized the Standard Cotton Mills, of which he was President until his death.

He was an active worker in Cedartown and instrumental in locating some of the towns most valued industries there. He was a devoted member of St. James Episcopal Church and was active in the diocese.

An Englishman by birth, Parker always maintained his allegiance to that country, and when war was declared between Great Britain and Germany he wrote to offer his services.

One of his cherished possessions was the letter of appreciation, which he received in reply, declining his offer on account of his age.